Roger Ryan with a holiday review on his Easyjet visit to the Stella Di Mare Hotel in Sharm el Sheikh, Egypt.

There was no escape from this perfect backdrop. We were no longer guests. We started to believe we were extras on the Truman Show. The lawns had not only been cut short but had the appearance of being shaved to the nearest centimeter.
Golf buggies with their smiling drivers trundled beneath the shade of the palm trees, ferrying guests to rooms with sea views, king-sized beds and luxury bathroom robes.
Customer service was of Ben Hur proportions – not just big but magnificent with it. There was a warm greeting from every member of staff. On the private beach, a waiter was on hand to bring us our elevenses, our twelveses and our beer o’clock lagers to our sunbeds. We had merely to raise a hand. He even offered to polish our sunglasses.
I spent the entire week waiting for Jim Carrey to appear and wish me a very special Stella Di Mare good morning.
It was forbidden to adjust towels without assistance. Guests seen opening their beach umbrellas were intercepted before they could be unfolded. Glasses were refilled almost as soon as the last drop had passed the lips. Well, so it seemed.
But challenges lay ahead. Four days into the holiday and Sue and I had still to grant the hotel cocktail list our full approval. I had warned her about the difficulties that lay ahead. We had been stuck on number six – the Jamaican, a heady mixture of rum, mango, orange and Grenadine. It took a full three attempts before we were able to sign it off to our satisfaction and move on to Tequila Sunrise. 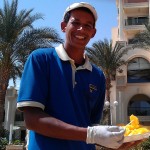 Then there was the food. With three restaurants to choose from nightly some tough decisions had to be made. Sue reminded me that with my waistline when it came to decisions on eating I was the man for the job. Would it be a Thai curry down by the beach, a seafood medley in the dimly-lit Mediterranean Restaurant or the prospect of a myriad of dishes to choose from in the main dining room? In the end I drew up a rota ¬– beginning with the beach side offering. Well, you have to start somewhere.
Civil unrest in Egypt, beginning in 2011, has hit tourism like a thrash from a camel’s tail. Hotels in Sharm are little more than half full. We were told that the flagship Hilton had only 40 per cent occupancy. The Stella Di Mare is no exception in this downturn.
Security in the resort is high. Soldiers with semi-automatic weapons are visible at round-blocks throughout the town centre. Sharm is some 400 miles from the Egyptian capital and visitors have nothing to worry about. The City of Peace is as safe as it has ever been. 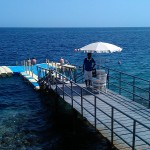 The troubles have left their mark on the Red Sea peninsula in other ways too. In previous years we had ventured into the Sinai on day trips, travelling along near-deserted roads, amid lofty sand dunes and jagged mountainous ridges to places with Biblical references. Deep in the interior you can still see tribespeople wandering across a near lunar landscape. Sadly, Foreign Office advice following tensions in the region now means few Britons are making these arduous but rewarding journeys. So by the coast we stayed.

Luxury deals
In response, the industry is working overtime to attract tourists to the resorts, keep them there and persuade them to return. All-inclusive packages in five star hotels in Sharm are without doubt the sunshine bargains of the year. Savings of up to £400 and £500 can be made on rival luxury deals offered by that other popular spring sunshine destination, The Canaries.
But do your homework before you leave. Our hotel in Naama Bay had attracted impressive reviews on Trip Advisor. They were not wrong. Some of the guests we spoke to by the beach had chosen the Stella Di Mare purely on the advice of the travel website.
It is not a holiday for those who seek adventure. The hotel with its stunning atrium and nightly pianist is ideal for couples for whom a holiday really is a time of rest.
Many opt for the Stella Di Mare as a means of recharging their batteries as they emerge from a hard winter. So it was not surprising to see the hotel’s Bubbles’ disco struggling with customers. The exception, I am told, was the wonderfully tacky Miss Stella Di Mare evening. We stayed by the piano. The Rachmaninov was rather good.
Away from the hotel, few visitors venture further than the centre of Naama Bay, where the dash for brash makes Las Vegas seem like Eastbourne. Bars and clubs are plentiful. For us, who have been before, it is a one-night only affair.

Red Sea delights
There are compensations. The snorkeling at Sharm is among the best in the world. Colourful fish congregate close to the shore. You really cannot miss them. Most hotels have a pontoon from which to sample these Red Sea delights. For those serious about underwater adventure, and for whom snorkeling is not enough, many hotels have a diving school where it takes as little as two days to earn your ticket to dive.
The Stella Di Mare was keen to show off its golf course. I did make a visit. Though the greens were lush, it turned out to be little more than a pitch and putt track. And at $25 for 18 holes was also expensive. We ignored the attractions of the spa. Fellow guests reported that prices were high here too.
I did have one complaint though. At 2.15 pm on the Tuesday, a cloud passed over my sunbed. I drew this to the attention of our beach waiter who assured me that he would do everything in his power to deal with the problem. At 2.20 the cloud had passed. You really could not fault the customer service.