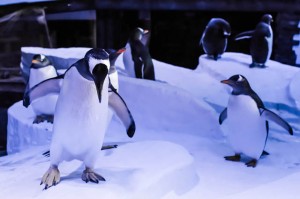 A J & E Hall cellar cooling system has been installed in the quarantine room set aside for the penguins at the Hull visitor attraction, The Deep. “We needed to set up a separate quarantine area to comply with legislation concerning the importation and keeping of penguins,” explained Andrew McLeod, assistant curator at The Deep. The Gentoo penguins imported from America have proved a big hit with visitors at the Kingdom of Ice in the aquarium complex.

The unit is a JCC 40E cellar cooler, supplied by distributor FSW. The installer was Cold Temp Refrigeration Services. JCC low-noise units are fitted with a standard electronic controller across the range which allows room temperatures down to 4°C. Cooling capacities range from 2.87 to 5.82kw.

There are now nine Gentoo penguins at the purpose-built aquarium which runs over three floors and features a large pool, beach area, nesting area and an outdoor balcony overlooking the River Humber.

Through working in partnership with Sainsbury’s, A-Gas has introduced a new carbon dioxide (R744/CO2) analysis and testing service in a move to improve the monitoring of CO2 refrigeration system performance. Ensuring moisture content and other impurities are kept within the recommended levels should be a key focus for everyone involved in the CO2 supply chain in the food production and supermarket industries.

A-Gas Managing Director John Ormerod said: “Natural refrigerants like CO2 are no different to traditional HFCs when it comes to quality. Ensuring CO2 supermarket systems operate within the strict boundaries of the correct moisture specification improves efficiency, reduces maintenance costs and saves money. During conversations with Sainsbury’s refrigeration technical specialist earlier this year, Sainsbury’s requested A-Gas’ expertise to help deliver a solution that would enable the monitoring of the quality of CO2 in their refrigeration systems and thus ensure reliability is maintained.”

Following successful tests with Sainsbury’s, A-Gas has now extended this analysis service to the rest of the HVAC industry. A-Gas provide customers with a suitably-rated cylinder in which they can supply a liquid sample from the refrigeration system. This is returned to A-Gas where it is tested in their state of the art laboratory and a full quantitative assessment is made.

Sainsbury’s Head of Refrigeration John Skelton said: “This service enables Sainsbury’s to monitor that the quality of the refrigerant within our refrigeration systems is within the manufacturer’s specification ensuring the reliability and longevity of all components.”

Earlier this year, A-Gas launched a new high specification Carbon Dioxide (R744) refrigerant, eCO2. The refrigerant is produced sustainably from waste sugar beet, is UK-sourced, has excellent thermodynamic properties and is a green alternative to HFC gases like R404A, commonly used in these industries. With a moisture content of 5PPM, A-Gas’ eCO2 sets the CO2 standard for the future and is the driest CO2 available in today’s market.

Network Waste has been working with the internationally renowned Adapt Low Carbon Group at the University of East Anglia in Norwich on a ground-breaking approach to sustainable waste management which could lead to paper waste being turned into bio-plastic.

The company, based at King’s Lynn in Norfolk, is in partnership with the University’s Adapt Low Carbon Group on a project involving paper crumb – the waste from paper milling. This is in co-operation with a Network Waste customer which produces up to 7000 tonnes of damp paper crumb waste per year at its mill.

Currently the waste is spread on the land but this is an energy intensive process which in the first instance requires removal of large amounts of water.  Network Waste asked Adapt to investigate whether a more sustainable commercial use could be found for paper crumb.

Network Waste National Account Manager Stuart Towler said: “We are a business which is always trying to find practical solutions for our customers in waste management and we are always looking for something innovative.

“We recognise that working with Adapt allows us to tap into cutting edge academic research. This is an option that very few businesses in the waste management world have and we believe that the paper crumb project could be something special.” 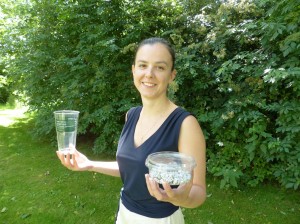 The paper waste is composed of complex sugars and research is focused on their effective recovery and ways to turn them into a valuable commodity known as feedstock.

“Looking to use this bio-processed material in the chemical industry is a fine example of adding extra value to the paper waste. We believe that the sugars found in the paper waste can help to replace traditional processes based on fossil fuels.”

Plug and play is the mantra of many a manufacturer in the building services industry. Whether it’s heating, cooling, cooking or entertainment, the manufacturer is always looking to make products easy to install and use.

For a West Norfolk company and NAPIT member Electra-mek, plug and play solar and wind turbine systems are driving business growth. The demand for alternative sources of off-grid energy is stimulating new business in the renewables market where, for customers, small is beautiful.

Electra-mek managing director Jim Stratford has seen sales of solar plug and play systems take off as people turn their back on traditional forms of energy supply. Jim should know. He is a supplier of off-grid solar power systems for the home. 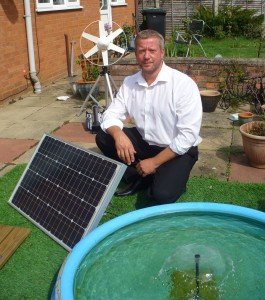 Like all of us, caravanners, campers and boat owners are becoming increasingly fed up with high energy prices. Camping gas is no longer the only alternative for heating, cooking and lighting. Every extra pound added to energy costs is persuading people to think again about how they power their outdoor persuits.

The journey to plug and play has not been without twists and turns for Jim, aged 43. He left school at 16 and followed in the footsteps of his grandad by becoming an electrician. He served a traditional electrical apprenticeship and passed his exams like thousands in the industry of that era.

By the early 1990s – when recession hit – electrical contracting was in trouble. so Jim switched to a career in engineering. Travel with big name employers like Walkers Crisps followed as did a move into project management and robotic packaging machines.

Eventually after much hard work, Jim tired of globe-trotting and returned to his roots in West Norfolk where he set up an electrical and mechanical contracting business in Downham Market, near King’s Lynn.

When Electra-mek was founded in 2004, Jim had worked in the industry for more than 25 years. The renewables boom encouraged the business to branch into solar PV. Success followed but fluctuations in the fortunes of the industry, provoked by reductions in the Feed-in tariff, persuaded him to think again and switch to the off-grid sector. “We didn’t just want to buy and sell, we wanted to use our expertise as an engineering company to design and build our own products,” Jim explained.

This decision proved to be a shrewd one. The business currently employs three people but is growing rapidly and Jim is aiming to take on two new employees.

Much of the equipment is manufactured in China, imported into the UK and then adapted to the needs of customers by Electra-mek. While I was with him, Jim showed me a solar-powered kettle, small enough to carry in a handbag and clever enough to boil water for a cup of tea in less than 20 minutes. Based on a solar thermal evacuated tube, Jim has high hopes for his sun kettle.

Plug and play wind and solar power systems are simple to set up and use, versatile and increasingly popular in the leisure industry. Caravanners and campers think the world of them as they go off-grid.

Televisions, kettles, lights and water pumps can be used in the great outdoors with the help of plug and play charging systems. All that’s needed is a solar panel or wind turbine, controllers to help with charge protection, leads, plugs and adapters – and a bag to carry the kit in.

You can buy a solar-powered mobile phone charger if you wish, allowing you to pack computer games in the suitcase and play them under canvas or within the shelter of a caravan or a boat.

You do, of course, need rechargeable batteries to run your home comforts but once set up the energy is there to make life that little bit easier.

Jim says: “Off-grid solar systems are becoming increasingly popular because people want to save energy and don’t want to pay big energy company prices on holiday – or at home for that matter.

“People are looking for alternatives. More and more are coming to us with what seem to be silly solutions but when you look at them closely they do make sense because they save energy and money.”

A recent example Jim gave me was when he was asked to look at a practical way of hooking up a solar water pump to a household water butt. The idea was to supply toilet cisterns with rainwater.

Jim’s order books for solar-powered systems are global. He is currently working on a project to develop a solar-powered fridge to keep vaccines cool in Sierra Leone.

Jim and his wife Sarah have two grown-up children, Carla and Ashley. He describes Electra-mek as a seven-day a week business and says he has little time for hobbies.

So where does NAPIT fit in? “I was a member of the alternative party, if you understand my meaning, and their customer services were diabolical. The way they treated their contractors was diabolical too and their fees were astronomical. A local sub-contractor recommended NAPIT to me, so I gave them a call. It’s been like a breath of fresh of air ever since.”

Traditional electrical contracting work still features on the order books but alternative energy systems are very much the future. Jim explains: “Our achievements will match the time I have to expand the business. At the moment there is no limit to what we can do.

“You’ve only got to look at the news every week. People are worried about energy conservation, fracking and wind turbines. What many don’t realise is that by the middle of the century they may not have a TV to watch the news on. Fossil fuels are very much on the way out. Energy supplies will be on a three-day a week shutdown. People are waking up to the idea that something has got to be done about this now.”