Roger Ryan finds out how NAPIT accredited Green Deal advisors are prospering as the scheme gets off the ground.

If the Green Deal turns out to be as successful as the Government believes, it will be a win-win situation for householders and the building services industry.

By eliminating the need to pay for energy efficient home improvements up front and meeting the cost of the measures through savings on a home’s energy bill, DECC believes this policy will make a significant difference in cutting the nation’s carbon emissions, and create a good deal of work for advisors, installers, providers and manufacturers.

The Green Deal was launched in January. Six weeks into the scheme NAPIT accredited Green Deal advisors were reporting a positive start with a good response from customers. 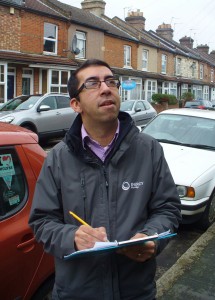 Plenty of work
Among them was NAPIT member Paul Raven, of Raven Solar and Electrical Services, Prestatyn, North Wales. He had received more than 40 inquiries since the beginning of February. Thirty-six had led to assessment work, mostly for external wall insulation or for new boiler systems.

He said: “I am pleased to say that customers are aware of the benefits of the Green Deal. I am getting several inquiries a day and plenty of assessment work. I have been carrying out assessments on behalf of insulation companies.

“So far, no money has been released for the work to be done. It is fair to say that there’s a sense that not everybody is equipped to process the work properly and people are waiting to see how the market will react.”

Encouraging signs
Nish Dattani (above) is another NAPIT accredited Green Deal advisor, upbeat about the scheme after its launch. He runs the Energy My Way franchise in north-west London and Hertfordshire.

When I spoke to him he had already completed 30 assessments. Most of his leads were from local authorities and community organisations, prompted by the Government to improve the energy efficiency of poor housing stock in the rented sector through the Green Deal.

Nish said: “There are encouraging signs. People are looking to make their homes more energy efficient. The Green Deal is a great conduit to allow people to do so but many householders are not aware of the scheme and how it operates. It is also a complicated mechanism to understand.

“I’ve reached the stage where assessments have been carried out and customers are talking to providers about putting energy saving plans together.”

Solid wall insulation
With thousands of properties in north London dating from the Victorian and Edwardian times, insulation in many homes is poor. It is estimated that there are more than 600,000 tenanted homes in the UK that fall below acceptable levels of energy efficiency.
Many buildings have no cavity walls but improvements in solid wall insulation techniques makes them suitable candidates for the Green Deal.

Nish said: “Seventy per cent of the assessments I have carried out have identified solid wall insulation as being an appropriate recommendation to improve the efficiency of the home. Where I am located, the majority of homes are of solid brick construction – so this is an ideal way of improving the energy efficiency of a property.”

The Energy Company Obligation, which involves the big six energy suppliers helping to fund measures to improve energy efficiency in areas of poor housing and social need, has led to further interest in updating solid and hard to treat cavity walls.

On the day I met Nish in north London, he had been assessing an older style terraced home in Watford. Applying a membrane of solid wall insulation to the exterior of the property and loft insulation were among the measures he was recommending.

Software issues
Nish clearly enjoys meeting people and advising on ways to improve older properties. He believes the Green Deal can be a springboard to reduce carbon emissions effectively but says that fine-tuning is needed to ensure that the scheme works as it is designed to: “There are obviously going to be glitches in the system. It is early days and I expect them to be ironed out as the process gathers pace.

“One of the areas advisors have struggled with is the software that allows them to estimate the energy savings of a property. It’s taken some time to find usable software that guarantees appropriate results but as these problems are sorted out and awareness of the Green Deal grows, I believe momentum will build in the market place.

“On the renewables side, I have seen some interest. People are wanting to use the Green Deal as a way of introducing solar energy to their homes but the main driver for the scheme at this stage is householders wanting to improve the thermal energy efficiency of the property through insulation and heating changes.”

Nish has been a NAPIT member since 2011. So what prompted him to join? “I run the local franchise of a national renewable energy installation company. In the past the focus of the business has been on the installation of solar panels, heat pumps and micro-CHP, so we have used NAPIT to achieve our MCS accreditation. We have a good relationship with NAPIT and it seemed a natural extension to continue with NAPIT as a Green Deal advisor.”

Landlords and tenants
Nish intends to stick with the Green Deal and has no doubts about its future. He said: “The overriding principal, of encouraging energy efficiency in people’s homes without any upfront costs and with any expenditure met by the energy savings made on a particular measure, is a good one. It lends itself to improving poorer areas of the housing stock – especially the rental and the by-to-let sector.

“Historially, there has been a problem in the landlord-tenant market. The landlord had no real incentive to improve the energy efficiency of homes because only the tenant benefited. With this scheme the tenant is paying for the work through the savings made on the energy bill.

“From a landlord’s perspective, these measures add value to the home. The tenant also benefits as the cost of energy rises and these energy efficiency measures make an impact.”

This feature appears in Issue 3 of The Competent Person magazine.
Visit www.napit.org.uk