It had been six years since I had last met Barry Fogg. At that time he was completing an electrical design and build project at Chester Racecourse.

In 2007 electrical contracting and maintenance was thriving on Merseyside. Barry J. Fogg Electrical Services were handling big contracts including the Port Sunlight Village Trust on the Wirral. But the recession hit hard. Domestic, commercial and industrial work slowed and Barry was forced to rethink how the business was being run. 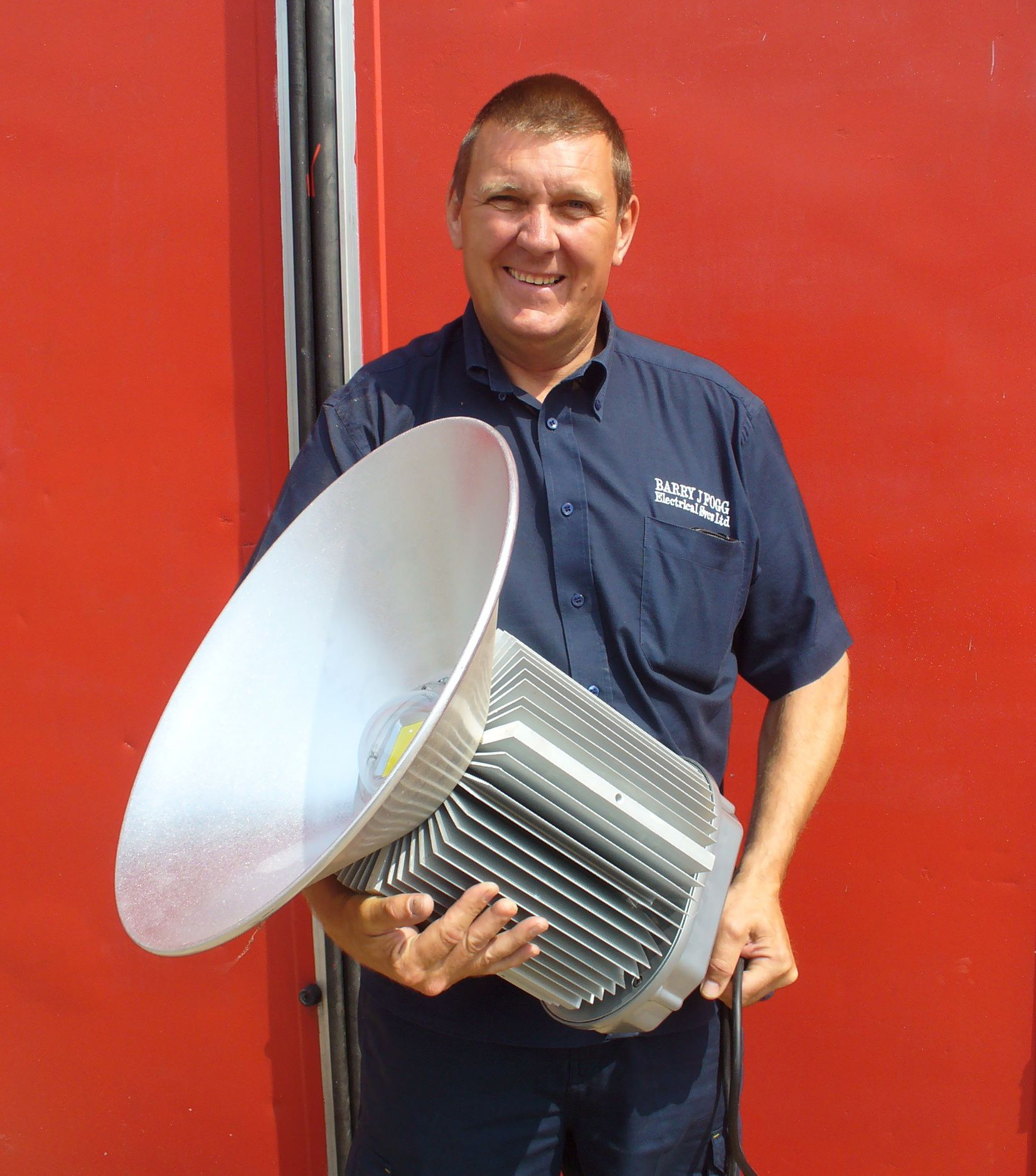 Carbon wastage
Barry explained: “Two years ago things were quiet. We needed new business. The object was to keep my existing staff in work – so I had to look at other avenues of revenue.
“I was on a job for Carphone Warehouse at the time. They had signed up to the Carbon Reduction Programme and they asked me to look at ways to reduce their carbon wastage and save them money.

“I had a friend who lives and works in China and he told me that the manufacture of LED (light emitting diode) lighting was becoming a major industry over there. He suggested that I went out to see what it was all about – and I did.
“I got a visa and travelled to China. I spent three weeks out there. We attended an LED lighting show – the biggest in the world. We looked around and found a LED product we liked. We went to the manufacturer to talk about supplying us in the UK and found someone who would back us.”

No middle man
Barry was looking for high quality energy-efficient LED lighting products that would sell well in the UK. China led the world in the manufacture of LED lighting but the products were not that well known in this country. “I thought to myself, it’s cheaper to import from China because you are cutting out the middle man,” he explained, “so we decided to create our own lighting brand.” Barry’s new venture, Elluminate LED, manufactures high bay, floodlighting and general lighting. The products are manufactured in China under licence.

But why take a risk on setting up a new lighting brand at a time when the electrical industry was in recession? “I wanted to back the product that I was supplying, so if anyone had a problem they would be dealing directly with me and I could sort it out,” explained Barry.

Elluminate LED is based in Birkenhead on The Wirral. Barry is responsible for sourcing the shipping, while his contact in China looks after the quality control and the paperwork. The business employs four people. Over the past year Elluminate LED has imported three containers of LED lighting into the UK.

“There’s a big market here,” Barry said. “We supply to local wholesalers but I also provide a package for customers where I give an energy assessment and then recommend and install new lighting, saving them a considerable amount of money, energy and carbon use.”

Huge savings
LED lighting can cut energy bills by up to 90 per cent. The equipment is claimed to last 30 per cent longer than incandescent bulbs and will fit into any standard lamp socket. Maintenance costs are lower and the life expectancy of an LED bulb can be up to 50,000 hours – more than 15 years of average use.

Barry said: “LED lighting is highly energy efficient – everybody is after a saving at the end of the day. Carbon emissions are reduced – an attractive selling point to many businesses. With old-fashioned gas-impregnated lighting the gas diminishes over time and so does the efficiency of the equipment. The lamp has to work harder using more wattage but with LED it’s generally DC voltage and will last a lot longer than traditional lighting.” In a kitchen refit for a typical home, Barry says that the savings made in energy use can cover the cost of installation in only three months.

Barry J. Fogg Electrical Services and Elluminate LED are riding the worst of the recession. Traditional electrical contracting jobs still make up 70 per cent of work on the order books but setting up an LED arm has saved jobs and opened up new markets.

“I still need qualified guys to do the job,” explained Barry. “I am still working in the electrical industry but it is a changed role for me. I wanted to get into LED when it was new before everyone became involved – get in early, get out there and get on with it.

“Dealing with the Chinese can be puzzling at times. The first batch of equipment we exported to the UK wasn’t what we expected when it arrived – it was the wrong colour. We’ve had to speak to them about a few things but once you find a reputable manufacturer you can deal with on a day-to-day basis, and they understand you mean what you say, then you start to make progress.”

National Express, Bargain Booze and West Midlands Transport have featured among the big name customers for Elluminate LED. Hotel chains have also been a good source of revenue for Barry. When I joined him, we visited the delightful Ship Hotel at Parkgate on the Wirral, with impressive views across the Dee Estuary.
Work was underway on a complete LED lighting refit inside and out.

Barry has changed the nature of his business during the worst of the recession and in doing so he has kept employees in a job. He has adapted and survived and now flies the flag for LED lighting with pride: “The minute you install LED you are making a saving straight away for the customer.

“If they look at the bigger picture, especially larger organisations where lights maybe on in the workplace 16 hours a day, it’s a win-win situation. The great thing is we can offer the full turnkey package. We design it, supply it and install it – everything the customer needs. I’m enjoying this new role – so long as I make a living at it.”